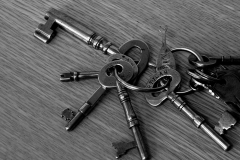 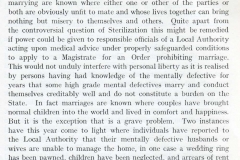 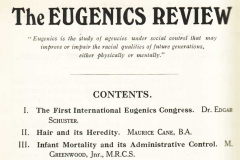 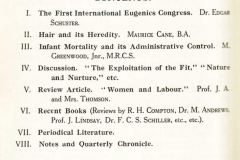 At the turn of the 20th century, industrialisation and social Darwinism both contributed to a strong campaign that called for urgent measures to deal with the problem of “mental deficiency”. Underlying this was the belief that “mental defectives” were not only the cause of most social evils but were an economic burden.

Social Darwinism drew on Darwin’s ideas of natural selection and emphasised the contribution of the fittest and most superior individuals to the survival of the human species. The social Darwinists, who included some of the most prominent thinkers of their time, believed that social ‘engineering’ or the control or manipulation and improvement of social conditions would do away with, or weaken, the effect of nature’s shaping forces. The result would be uncontrolled breeding and weakening of the genetic pool and hence the deterioration of the race and swamping of the higher types within society. Eugenicists took these ideas further, arguing that those who were weaker, ‘degenerate’ or ‘defective’ in some way should not be allowed to breed or interbreed at all as their offspring would inevitably degrade the quality of the race. Poverty, ignorance, mental defectiveness as well as lack of moral values were seen as evidence that British society needed to purify its genetic stock and deal with what were seen as poisonous environments in the slums and factories. Great emphasis was placed on parenthood and procreation.

Eugenics ( from the Greek word meaning “wellborn”.) is defined as “a science which deals with improving the hereditary qualities of a race or breed through methods which include control of mating”

With Charles Darwin’s on the Origin of the Species the issues of heredity and “Survival of the Fittest” were brought into the medical world, which is also where the treatment of people with learning disabilities had been placed by the 1850s. While eugenics would lead to the persecution of people with learning disabilities, it was more widely recognised with respect to the genocide commited by Nazis in Germany.

The influence of the eugenics movement in this country was strong and had a particularly pernicious effect on the care of children with learning difficulties. Ideas based on notions of racial purity led to demands for compulsory sterilisation of young people with learning difficulties and the application of a condemnatory morality which saw unmarried mothers locked away in mental handicap institutions. Their custodial care came largely to be accepted by the medical and educational establishments and their situation largely invisible to wider society.

People with learning disabilities have been subjected to sterilisations for reasons of behavioural control as well as eugenics. However eugenics and sterilisations have been closely intertwined throughout history.

Moves toward paroling people with learning disabilities from the institutions in the early 1900s also lend it’s support for sterilisations. If they were going to be let back out into the community, it was reasoned, then precautions should be done to ensure that they did not breed more mental defectives which would later either require institutionalisation or would work to damage society through criminal activity or promiscuity.

Eugenicist ideas flourished well into the twentieth century and, some argue, are still alive today, with concern about reproduction a persistent thread as these quotes demonstrate:

The unnatural and increasingly rapid growth of the feeble-minded classes, coupled with a steady restriction among all the thrifty, energetic and superior stocks constitutes a race danger. I feel that the source from which the stream of madness is fed should be cut off and sealed up before another year has passed.

(Churchill, a proponent of forcible sterilisation, in a private letter to Prime Minister Asquith at the time of the Royal Commission on the Care and Control of the Feeble-Minded, 1904, quoted in Ponting, 1992, p. 23)

[It is] not the very severe cases which are the most dangerous: it is the mild cases, which are capable of being well veneered, so as to look, for a time at any rate, almost normal, against which there is most need to protect society.

Let us assume that we could segregate as a separate community all the families in the country containing mental defectives of the primary amentia type. We should find that we had collected among them a most interesting social group. It would include everyone who has extensive practical experience of social service would readily admit, a much larger proportion of insane persons, epileptics, paupers, criminals (especially recidivists), unemployables, habitual slum dwellers, prostitutes, inebriates and other social inefficients than would a group of families not containing mental defectives. The overwhelming majority of the families thus collected will belong to a section of the community which we propose to term the ‘social problem’ or ‘subnormal group’ … If we are to prevent the racial disaster of mental deficiency we must deal not only with the mentally defective persons but with the whole subnormal group from which the majority of them come … The relative fertility of this (subnormal) group is greater than that of normal persons.

[While dementia means being ‘out of one’s mind’ amentia was used as another word for ‘mental deficiency’ or a lack of mind.]

While these theories of heredity appear to be widely accepted as explanations for “mental defectives”, new psychological theories were developing (e.g. psychoanalysis, behaviourism) which emphasised the role of the environment as well.

While we entered into a World War with Germany who was sterilising and murdering in the name of eugenics, we continued to practice sterilisations in our institutions. In fact we continued the practice until the mid 1970s.