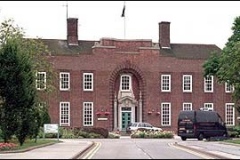 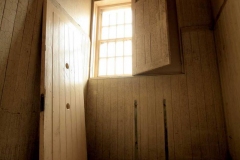 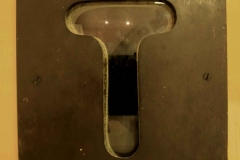 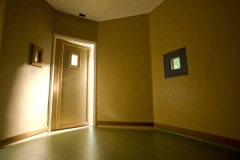 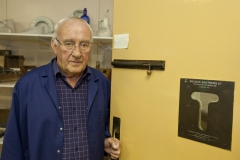 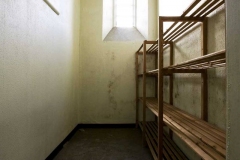 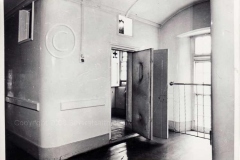 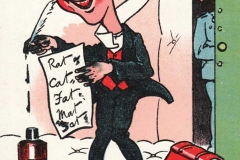 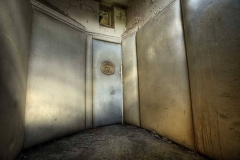 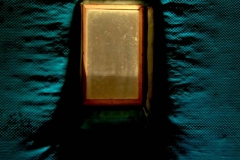 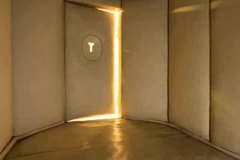 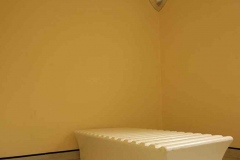 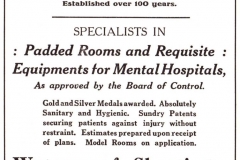 As infamous as the Asylums themselves, the Padded Cell was an essential requirement in the general care and management of Asylum Inmates.

Although the Padded Cell was a special room it was not intended that patients would be housed in them for extended periods of time and would in an ideal world only be used as a last resort. Their primary function being a means of ensuring the patient avoided injury when suffering from an epileptic or psychotic attack. Suicidal and violent patients were also subject to periods within them in order that the nursing staff were able to effectively monitor the patient in a safe enviroment, patients were on ocassion further restrained during their confinement in order to further reinforce the primary function.

Padded cells became fashionable when Dr John Conolly, the Third Medical Superintendent at Hanwell Asylum, brought about new reforms abolishing the use of mechanical restraint to control the patients within the Hanwell Hospital when he was elected the in-house physician in 1839. This was the first time that the idea had been implemented on a large scale; the Lincoln Asylum & the Retreat at York were the first to use the priciple – however it was to initially meet stiff resistance countrywide from other Asylum Superintendents, unpeturbed Conolly’s ideals eventually won through leading to the abolishment of mechanical restraint in other institutions. By using a system of therapy, seclusion (including padded cells), confinement and some sedatives Conolly was able to effectively control patients within the Hanwell Hospital. The only restraint used was ‘heavy clothing’ but this was to prevent patients from tearing their clothes of breaking crockery. With these ideas, the Lunacy commission adopted the ideas and implemented them around the country. Pictured is the padded cell at Stanley Royd Hospital formerly the “West Riding Pauper Lunatic Asylum, Wakefield”, this cell was last used in 1959 and ultimately removed in 1963.

An account from a visit to St Francis Hospital by a reporter from the Brighton Gazette on the 1st of August, 1861 describes the padded cell.

“One small door was unlocked, and we looked in, not upon a patient, but upon an empty room, a room we had heard of as part of such a building, – the padded room, – thickly covered all around and on the floor with padded cloth, a sure preventative of self-mischief from even the most violent. And this was untenuated, and more than this it was seldom used we were told.”

The construction of a Padded Cell was quite uncomplicated, a normal seclusion room would be modified to allow the fitment of a double locking door and a series padded panels to make up the walls, a padded floor and ceiling would be added in order to make it a completely safe enviroment. The padded walls themselves were either consructed of leather pouches, or canvas, they would be then stuffed with horses hair and painted; this provided a very durable but firm padding. Often the panels would become ripped by patients and in some instances actually eaten, if this was to occur they would be sent to the in house upholsterer for repair, whereby they would be recovered this being a relatively quick process before being sent for painting, the painting process was both laborious and time consuming involving multiple coats of paint, more often than not taking at least a week to complete. One such manufacturer, and installer, the Pocock Brothers advertised their padded rooms in trade directories dedicated to supplying Goverment Institutions of this nature. The more modern padded rooms that have been found at Harperbury (originally a Defective Colony) were construced from foam and plastic; this provided a perfect enviroment in which epileptic patients would be placed whilst suffering a seizure.

With the advent of new psychiatric treatments, sedatives and medical procedures the padded cell became a redundant tool in the mental health profession. Their withdrawal started after World War Two, along with the shift in the treatment of patients – Whitecroft Hospital had theirs removed as late as the 1980’s. There is only one padded cell remaining in a former Psychiatric Hospital that being at West Park Hospital, Epsom; another example is at the The Stephen Beaumont Museum of Mental Health, Feildhead Hospital, Wakefield. The Cell at the Museum originates from Rampton, unfortunately during modernisation at Stanley Royd in the 1960’s the one you see pictured was consigned to the skip.