Stapleton Park – The Hospital That Never Was 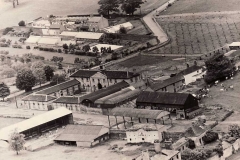 STAPLETON, a township, in the parish of Darrington, Upper division of the
wapentake of Osgoldcross, W. riding of York, 4¼ miles (S. E. by E.) from Pontefract;
containing 138 inhabitants. The township comprises by computation 1760
acres of fertile land in high cultivation. Stapleton Park, the seat of the late
John Watson Barton, Esq., was originally the property of Edward Lascelles, Esq.,
who succeeded to the title of Baron Harewood in 1796, and erected the present
spacious and elegant Hall. A portico of the Doric order, which now forms the
principal entrance, was added by the Hon. Edward Robert Petre, who in 1833
sold the estate to Mr. Barton. The park is richly wooded, and watered by a rivulet.

By the year 1934 it seemed evident that available bed space in the four
mental hospitals under the control of the West Riding Mental Hospitals Board,
Menston (Highroyds) , wadsley (Middlewood), wakefield (stanley Royd) and
Storthes Hall, was rapidly approaching a point at which the situation would be
out of hand, and additional accommodation was felt to be urgently required.
An analysis of the situation revealed the fact that the area of the Riding
least satisfactorily provided for was the South East corner, i.e., Pontefract,
Hemsworth and the surrounding districts.

A search for land on which to build an entirely new mental hospital (which
would have been one of the few to have been built in this century), revealed a
suitable Estate called Stapleton Park, in the parishes of Darrington, Stapleton,
Little Sneaton and Kirk Smeaton, four miles from Pontefract and 13 from
Doncaster. It would provide all the seclusion then felt to be essential for
a mental hospital, Yet would be reasonably accessible for all the areas in need
of this facility .

Stapleton Park had been a typical country Estate, consisting of a Hall with
gardens extending to some 1O acres, farm buildinge, arable and meadowland a
further 243 acres, a park of 39O acres, plantations 4OO acres, and a lake of some
6 acres, 1049.8 acres in all.

The Estate had changed hands a number of times around the post-1914/18 War
years, each owner apparently aiming for a quick profit. As a result the Hall
had been stripped of all its valuable contents, including lead and copper and
had fallen into such decay that an order had been placed on it by the Local
Authority, either for its total demolition, or for it to be securely fenced off.
The former choice was decided upon, and on its being taken over by the Board the
only use being made of the site was the growing of mushroorns in the cellars by
the Estate Farm Manager.

The farm buildings and cottages were in a most dilapidated state and were not
connected to mains services. Generally the Estate had suffered from indifferent
management. There was a range of rather elegant limestone stabling, over 100
years old but in reasonable condition, part of which was in use as living
accommodatlon, being occupied by one of the Executors of the Estate.
The Executors first asked a sum of £15OOO for the Estate but finally accepted
£1OOOO. Purchase was completed on the 30th September 1937. An interesting
sidelight, which caused. a good deal of sardonic amusement for many years was the
Inclusion on the letter heads of the West Riding Mental Hospitals Board, which
announced that it controlled hospitals at Menston, Wadsley, Wakefield and Storthes
Hall, of the legend “and stapleton park (site purchased).” After this, seldom
were the words “Stapleton Park” uttered by the lower orders than a soto voce “site
purchased” was added!

After the purchase a few of the existing Estate staff were retained, and,
pending commencement of building work, the estate was to be operated by the Board
as a farm, produce to be sent in the main to the four Mental hospitals. A stone
quarry on the Estate continued to be worked privately on payment of Royalties.
The affairs of the Estate were in the hands of an “Accommodation Committee”
a sub-committee of the Board. The name of the committee was later changed to
“Stapleton Park Sub-Committee”, and its affairs were eventually merged. with the
general business of the Farms and Gardens Sub-Committee. At the first it was charged.
with the task of submitting to the Board its recommendations on the planning of the
proposed new hospital.

Before application could be nade to the Ministry of Health for consent to the
borrowing of money for the hospital, detailed proposals and plans had to be
submitted to the Board of Control (Successors to the old Lunacy Commission), who, if
satisfied that its various criteria were being met, would give its authority for
the miinistry to proceed further. The Lancashire Mental. Hospitals Board being at
that time considering building a new mental hospital, and having adopted a policy of
holding an Open Architectural Competition with premiums of £500, £4OO, and £300 for
the three designs placed first, second and third (with the prospect of further
valuable commissions), the West Riding Mental Hospitals Board considered how it should
act, but decided that as the designs would in any case be severely restricted by the
Board of Control building regulations, but even more importantly that it had already
a large Architects and Engineers Department, supervised by a fully qualified
Architect and Engineer (a somewhat rare double qualification), planning and design
could well be undertaken using the existing resources of the Board under the general
control of this officer, Mr, W .H. Burton,

It so transpired that before more than preliminary work towards planning and
design could be put in hand, the whole project had to be shelved by the advent of
the 1939-45 War. Perhaps this was fortuitous, as by the time the War was over the
health Service was in the throes of massive reorganisation, and, almost imerceptibly
at first, new methods of treatment and the discovery of new drugs were gradually
reducing mental hospital populations and rendering unnecessary the building of large
purpose-built mental hospitals.

The estate continued to be run as a farm, and as is so often the case, became
almost self-perpetuating. Stapleton Park had become almost a way of life, and the
Management Committee which had superseded the oId Board found the farming activities
at this large Estate fascinating and novel. Under its Secretary Mr. G. L. Banner,
who had been responsible for the apparent far-sighted purchase of the Estate back
in 1937, the Management Committee sought to retain it. The policy of the ministry
however was to dispense with all hospital farming activities, considering that the
employment of mental patients, which had been the chief reason for the acquisition
of farms was by this time of little more than marginal value, and otherwise farming
formed no proper part of the activities of a hospital. If land used for farming
could not be justified on grounds of probable future hospital development, or to
give reasonable seclusion to the existing hospital, it had to be sold. The retention
of Stapleton Park could therefore not be justified on any grounds, sad though it was
as with careful administration and the investment of no inconsiderable amounts
of capital over the years, the Estate had appreciated very considerably in value.

A decision was taken by the Leeds Regional – Hospital Board, in whose hands
the property had by then devolved, that the Ministry be recommended to authorise
the sale of all but approximately 40 acres of the Estate, which was to be reserved
for possible future hospital developnent. Its use for this purpose was considered
when it was decided to build a Mental Handicap Hospital, but it was tbought to be
unsuitable.

The Ministry’s approval was predictably swift, and a year later, on the
21st January 1958, the Estate was disposed of at the Red Lion Hotel in Pontefract,
by Public Auction.

The main part of the Estate (73O acres) was sold for £53OOO to a Mr.A.E. Brown
of Doncaster, a further 23 acre s fetching £1550 at the same time. The 37 acres at
first retained for possible future hospital development was leased to Mr. Brown,
and later, when it became apparent that it would not be required, was sold to him.
The price of this, and of the remaining 254 acres of woodlands sold to the Forestry
Commission, does not seen to have been recorded on the Committee’s Minutes, if
indeed the Regional Hospitals Board ever divulged this.