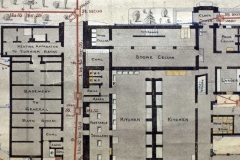 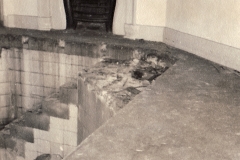 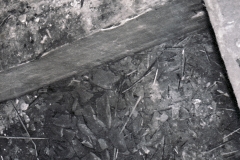 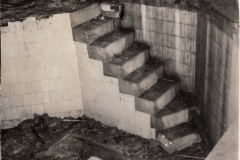 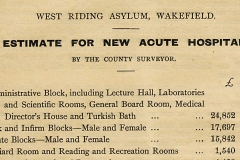 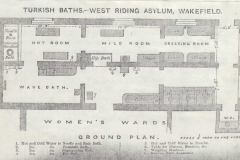 What could have proved to be a nasty accident during the excavating for the new sewerage system was narrowly averted by the driver of the mechanical digger hastily reversing his vehicle when he saw the roadway opening up in front of his wheels. The roadway collapsed, revealing a network of rooms beneath.

It is sad to reflect that, within a few feet of this incident, in the year 1859, two patients were buried by the collapse of the walls of the “tunnel”, which had been inadequately shored up during work on the laundry above. The patients were wheeling barrows of manure for the gardens through the tunnel. Both were dead when they were extricated.

The “discovery” of these underground rooms brings to mind a most exciting and fruitful period of the hospital’s history, for these rooms were once the basement and heating chambers of a “Bath House” erected in 1871, during the terms of office of the great Dr. (later Sir) James Crichton Browne.

His report for that year, which contains a most interesting plan of the layout, speaks in glowing terms of the new development, which he describes as “this most important addition to the resources of the Asylum”. He continues “As the fittings are of a very superior quality, and as the labour of patients who are skilled artisans was to a large extent employed on them, it was found impossible to finish them more rapidly, but the delay has secured a competence and an aspect of elegance which could not otherwise have been obtained.

Lined with encaustic tiles, lighted by diaphanie windows and with doorways ornamented with stone arches in the Moorish style, the Turkish bath house is divided into six chambers. The first is used as a dressing room and is furnished with couches, looking glass etc. The second is the mild room generally kept at a temperature of 110°F and is supplied with suitable wooden reclining boards and hot and cold taps with basins for bathing the head. The third is the hot room and can be kept at any temperature that may be required up to 190°F. It is also supplied with reclining boards and out of it opens the rain and drizzle baths, a coil of pipes with innumerable minute perforations, in the midst of which the person to be operated upon stands, so that myriads of jets of water of any required temperature may be directed upon every aspect of the body. Adjoining the drizzle is the fountain bath, from which a forcible stream of water may be applied to the rectum or anus. The third chamber or hot room may be at any time filled with steam and so converted into a Russian Bath. The fourth chamber is kept at the temperature of the air, and contains the shampooing table and basins, as well as the Wave Bath from which a broad sheet of cold water can be made to sweep over the body.

In the fifth chamber is the weighting machine, a common porcelain bath for alkaline fluids, and the entrance to little recesses devoted to the Sitz, Hip and Douche Baths. In the sixth chamber are arrangements for the Medicated Vapour Baths, Iodine, Mercurial, and Sulphur, each of the three compartments being connected with flues which when required can convey away offensive fumes. With each bath the hot and cold water are made to mingle in an iron box in the centre of which is a bulb of a thermometer, the scale of which projects externally so that the temperature of the water in the box can always be read off”.

Crichton Browne concludes “I believe there are no baths in this country…which are more complete or more pleasing in their general effect than those of the West Riding Asylum. The baths have already proved singularly useful on relieving that terrible despondency under which so many patient’s labour, and in the treatment of skin diseases, rheumatism and other bodily ailments.” His euphoria must have received a cold douche when he read the next Annual Report of the Lunacy Commissioners who expressed a hope that provision of additional bathing facilities would render unnecessary that bathing of two patients in the same bath water!