The Seal of Honour – The King’s National Roll Scheme 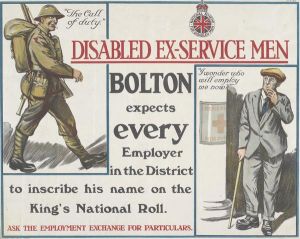 The King’s National Roll Scheme (KNRS) was an

employment programme implemented for disabled ex-servicemen of the First World War. It was practical, innovative and ahead of its time. The KNRS was the most important piece of legislation enacted for disabled ex-servicemen in interwar Britain. Not only did it achieve significant short-term goals but it also invoked wider debate regarding the employment of disabled veterans and the responsibility of the state, paving the way for future reforms.

A Royal Proclamation issued on Monday marks the launching of a new Government scheme to secure the more rapid absorption of men disabled in the war who are still out of
employment.

The test of the Proclamation is as follows

WE , having learned that many men returned from Service with Our Navy, Armies and Air Forces, disabled whether by wounds or physical afflictions, have not yet found a permanent means of livelihood, and being persuaded that it is a dear obligation upon all who, not least through the endeavours of these men, under the mercy of
Almighty God, enjoy the blcssing af victorious peace, to make acknowledgment of what they have suffered in Our behalf :

NOW, THEREFORE, We have thought fit, ‘by and with the advice of Our Privy Council, to issue this Our Royal Proclamation, most earnestly charging all those of Our loyal subjects, being employers of labour, that they do bind themselves to take into and keep in their service as many, being thus disabled, as their several businesses will allow, not being held back in their performance of this high and solemn obligation either by fear of inconvenience or loss, but rather omitting nothing which will secure that occupation be found without
delay for all these whose lack of employment would offend the general conscience ; and to this end, We have signified Our will and pleasure that the National Roll of those who undertake to employ such men in accordance with thc? plans prepared by Our Minister of Labour shall be styled and known as the King’s National Roll: And We do hereby
further exhort all Ministers of Religion in their respective churches and chapels within Our United Kingdom of Great Britain and Ireland to read or Cause to be read this Our Proclamation on such convenient days as may be arranged after the issue thereof.

Given at Our Court at Buckingham Palace, this Eighteenth day of August, in the year of Our Lord One thousand nine hundred and nineteen, and in the Tenth year of Our
Reign.

GOD SAVE THE KING.

It is estimated that there are at least 100,000disabled men who need employment, and the Ministry of Labour has issued an Official Memorandum, in which it is stated that the
object of the scheme is to secure and maintain the complete absorption /of all disabled men, coupled with an equitable distribution among the several industries. The scheme has been discussed with the majority of the staple trades in the country, as represented by the NationaI Trade Advisory Committees and Industrial Councils. It has been in some cases accepted outright, in others accepted with modifications, and in the engineering and shipbuilding trades is forming the subject of further local discussion. The results of these arrangements are summarised in an appendix.

A “ disabled man ” is defined as

(a) Any man in possession of a disablement pension.

(b) Any man who has received from the Ministry of Pensions a gratuity for a minor disablement or aggravation of a complaint, and who is adjudged by the local employment committee to be incapacitated, either  wholly or in part, from following his normal occupation.

We are glad to learn that the Iocal employment committees of the Ministry of Labour are contemplating a great canvass of employers by letter and by personal call.

We recommend that nurses should do all in their power to help make the King’s scheme a success. To help the men whose seIf-sacrifice has saved the Empire is a national duty, and‘ we nurses must look around to see how we can prove our gratitude to them.
—
‘‘THE NATION’S CREDITORS.”

But as they stood there chattering, Out from the station came A string of cautious motor-cars Packed full of lean, brown men- The halt, the maimed, the blind, the lame, The wreckage of the wars- Their faces pinched and full of pain, Their eyes still dazed with stress and strain- The Nation’s creditors.