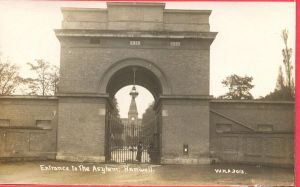 Persons willing to Contract for the making of Two hundred Pairs of Shoes. VIZ:- One Hundred for Men and One Hundred for Women, (of different sizes), for the Pauper Lunatic Asylum in Wakefield, are requested to deliver their proposals at the Court House on Friday the 15th Inst: One Hundred pairs to be delivered in a month and the remainder in Two Months, from the time
of Contracting.

In A Well-Regulated Institution, Every Means Ought To Be Invented For Calling Into Exercise As Many Of The Mental Faculties as Remain Capable Of Employment..

A Treatise On The Nature, Symptoms, Causes And Treatment Of Insanity….

On 11 December. 1817 “Mr ancl Mrs Ellis” were unanimously elected Director and Matron at a joint salary of £25O a year, with effect from 1 January, 1818, payable one year in arrear. The Asylum, an H-shaped building, was finally. opened on Monday, 23 November, 1818 (one year and five months behind scheclule), by the admission of four men and four women patients. By 31 Decentber, 1818, the population had risen to 29, but it was not until 1821 that the full potential of accommodation of 150 was taken up.

William and Mildred Ellis superintendent and matron were devout Methodists, taking part in many of the activities of the Methodist community in Yorkshire. William Ellis, who thought his asylum work was divinely inspired, tried to bring Christian principles into the heart of asylum management.

From 1818 to 1828 he personally conducted prayers every morning for patients and staff and ran Sunday services. He was relieved of these responsibilities by the 1828 County Asylums Act, section 32, which required the asylum management to appoint an official asylum chaplain

His parents were William and Sarah Ellis. William Charles was christened on 9th september 1782 at Alford, Lincolnshire, which is south of Louth. They were married on 13 February 1806 at Louth, and both of them are shown as “of Louth”. In other records they are both shown as “of Wakefield

Mr and Mrs Ellis regarded the asylum as a community. They referred to staff and patients as a “family”, of which they were the heads. In this they followed the example William Tuke (b.1739, d.1832) had set at the York Retreat of the Religious Society of Friends (Quakers) as early as 1796.

Medicine, Ellis claimed, was the least important part of treatment. What mattered most was “moral treatment”. He endeavoured to employ keepers and nurses of “character and respectability” and to engage patients in useful employments around the asylum. “The reward of a little tea, tobacco, beer or some other luxury” was used to induce them to work in wards, workshops or grounds. deprivation and confinement were used as punishment.

The Ellis system was both humane and economic, because the work of the patients considerably reduced the costs of running asylums.

The Ellis system was not non-restraint, however, because instrumental restraints were used when needed. In the early 1840s asylum doctors divided into hostile camps of those who practised “mild restraint” and those who followed Lincoln and Hanwell in establishing non-restraint. The debate involved the JPs who governed the asylums, the religious ministers required in Asylums under the 1828 County Asylums Act, the medical profession outside asylums, the medical press, the non-medical press, parliament – and eventually everyone with a taste for reading salacious and vitriolic accusations and counter-accusations as the contenders published selections from one another’s case notes in an effort to prove their point

In 1831 the Ellis’s resigned their respective posts at Wakefield to become the Superintendent and Matron at the newly opened “Hanwell Asylum” Middlesex.

In 1835 Colonel Clitherow was the Originator and Treasurer of Queen Adelaide’s fund for the benefit of those Patients who have been discharged cured from Hanwell Asylum.

In 1835 Clitherow drew the attention of William 4th to the merits he saw in Ellis and, as a consequence, the King decided to make him Sir William Ellis.

In 1838 Ellis published A Treatise on Insanity which he dedicated to Clitherow. Hunter and MacAlpine quote the following from the dedication:

“You have long stood forward as the benefactor, and unflinching protector of the Insane. To your influence and unwearied exertions is mainly to be attributed this spacious building for their reception.. By your having kindly allowed this humble effort.. to be introduced into the world, under your auspices, you have added another to the many obligations I have already received from you.” (H + M’s Conolly , Vol.1 p.19)

Ellis resigned from Hanwell early in 1838, when he became Director of a private asylum, Denham Park, before establishing his own asylum, Southall Park, in grounds to the north west of the Hanwell County Asylum.